Not everyone feels the need to buy tablets with high-end specifications. Tablets have many functions for modern consumers, and finding quality devices under $50 is difficult. However, price is no guarantee of satisfaction. Many people are dissatisfied after buying expensive tablets because the hit their checking account takes is often not worth what the tablet provides. People who won’t be using tablets regularly should consider these cheaper tablets which have plenty of features with less subtraction from their savings. Here, we’ve compiled what we think are the best cheap Android tablet reviews.

What are Tablet Computers?

Tablets are very convenient devices to have for multiple reasons. Entertainment is much simpler with a tablet that has specifications for streaming your favorite shows and movies. Android tablets tend to have great screens for media platforms, even considering the less expensive prices. You’ll usually want a screen with at least 800 x 400 resolution if you plan on watching videos.

Great hardware is another essential quality when you’re considering purchasing a tablet. You’ll want at least a quad-core processor to run apps more efficiently. There are plenty of amazing 8 GB Android Tablets for sale right now, which is the minimum you’ll want for applications, movies and TV.

This is a list of the Cheap Tablets for Sale currently about $50 with enough technological amenities to satisfy their customers. 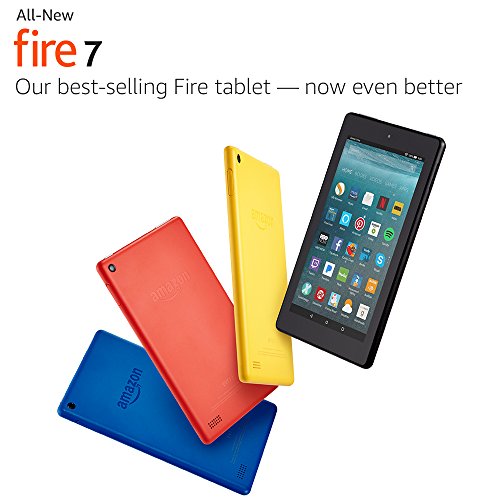 Amazon has built a reputation for selling reasonably priced electronics and the new Fire tablet has just been added to their long lineup.  Coming in at just under $50, this newest offering in the Fire lineup is packing some interesting surprises.

It features a 7″ display, much better than the 6″ that we were expecting.  While the 1024 x 600 IPS display isn’t anything to write home about, it’s certainly decent for a tablet of this size and quality.  The quad-core processor features four cores of a respectable 1.3GHz each, which means that this device loads books and videos fairly quickly and gives a good overall performance.

Perhaps the coolest feature on the new Fire is the fact that the user has access to Amazon Freetime, an app with literally thousands of free apps and games, including Angry Birds, Frozen and Sonic Dash.  The device also comes with a free 30-day subscription to Amazon Prime, which gives users the ability to watch and download thousands  of movies, TV shows and songs for free on the Amazon website.

And don’t forget: You can access Alexa – Voice Assistant on this New Fire Tablet 2018 – Your kids have someone to talk to anywhere.

The Dragon Touch model has the basic specifications that make most tablets great. Among those specifications is its quad-core processor. A quad core processor for a tablet at this price is amazing. This tablet will be able to run multiple applications at once without breaking a sweat. It runs on Android’s KitKat 4.4 OS, a generally well-reviewed operating system. Its resolution is 1024 x 600, so the picture is good enough to enjoy games and TV shows.

There’s also 8GB of storage space, which is great for such a low price. You can also add more storage with a micro SD card. The front and rear cameras of this tablet are both 2MP cameras and will take great pictures and function well as a webcam. Wi-fi is a must-have to let you do wireless internet and is another great feature of this tablet. Of course, buying a low-price piece of technology can make people nervous about satisfaction, but TabletExpress offers a one year warranty for any defects you could potentially find.

This 2016 Model is an enhancement and ideal tablet for your kids. It comes with Zoodles (Most Popular Kids Learning & Education App) pre-Installed.

A kid friendly (and kid-proof) Colorful Silicone Case protection that is a must-have for your child’s new buddy. We all know how careful kids are with their toys…

Wifi and Camera are other must-have features that this tablet has. Your kids can have fun taking pictures and being creative with them on Apps. Books, games and movies can all be in their hands with the Amazon marketplace.

Pink is also available for your gals. (This price with a fun case is a steal deal.) 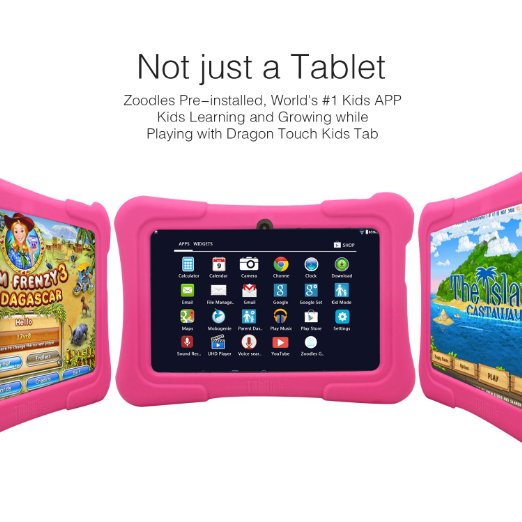 For about $10 less, Android also offers their Chromo Inc 7” that also comes with a quad core processor for fast and efficient gaming, multitasking, and web surfing. It only has 4GB of storage, though, which is one of the major setbacks for paying a little less. Another downgrade is its operating system, the Android 4.1, which doesn’t quite match the KitKat.

The Chromo Inc has a front and rear camera with 1.3 MP, and will still get the job done for sending funny photos to friends or chatting on your webcam. This is a capable tablet but it’s also very basic. This device will work well for people who aren’t going to rely on it for serious work, or who only need it for a small number of tasks. It also has black and pink colors to choose from.

This product is a steal and good for a kid’s next birthday gift! 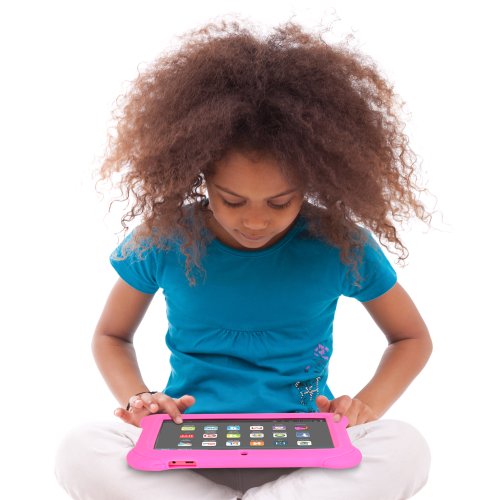 This cheap tablet is marketed towards children, but, truthfully, can be used by anyone. It’s the second most expensive device we have listed here. It only has 4GB memory which you can further expand with a micro SD memory card. The main reason this product is marketed as a kid’s tablet is its case that comes with it. It has a cartoonish design to appeal to children. The case is also very durable for those unanticipated drops and accidents. This tablet does operate as well as any other, though, and even ties the Dragon Touch for its screen resolution at 1024 x 800 pixels.

Child games and settings can be added to the device to make it geared towards a younger age, but it doesn’t necessarily come child-proofed. It has a front facing camera, and can be fun for photo booth and Skype. The product is light and the color is attractive to kids overall. Pink and Redare popular too.

The ProntoTec 7” is the least expensive device on this list and is being sold for only $45.99. This tablet is strange because it has the same operating system as the Dragon Touch, outclassing the Chromo Inc, but it only has a dual core processor. This means it isn’t going to run applications as quickly as the first two, and it’s not as capable at multitasking. It matches the Chromo Inc’s storage capacity at 4GB, but you can’t expect too much more from a tablet at this price. You also see a downgrade in image quality since it displays 800 x 400 pixels and in 16:9 ratio. So, it’s definitely capable of streaming your favorite shows, but be prepared for less definition. Its camera has 0.3 MP in front, and a 2.0 rear camera, so it’s a little better for taking pictures than it is for webcam purposes.

Pink, white, and black are available too. 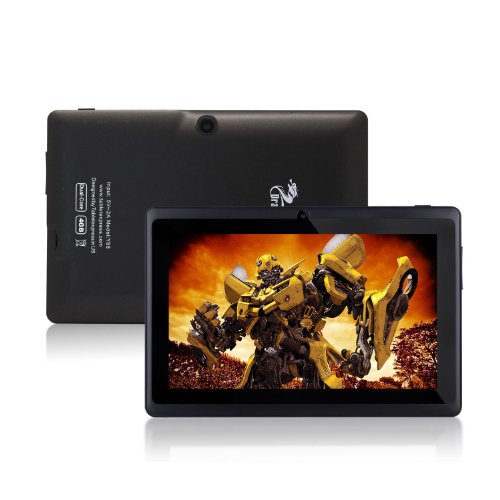 This is a less advanced version of the first device listed and only costs $54.99. The two major differences between the Y88 and Y88X are their operating systems and their processors. The Y88X has a quad core processor and superior operating system compared to the Y88’s dual core processor. Their screens are tied at 1024 x 800 pixels, so Androids main upgrades had to do with software and hardware.

The Dragon Touch Y88 has the same camera specifications as the ProntoTec. However, this device also comes with the aforementioned one year warranty for any defects that manifest in the device. This device won’t be as fast or as smoothly running with  applications as the Y88X, which is the major setback of paying only $5 less. Go with Y88X with faster CPU and more memory if you can.

Why do I need a tablet?

Even tablets that are lower on specifications are awfully convenient for portable web browsing and note taking. Having a portable computer with a touchscreen can make work, entertainment, and keeping up on social media so much easier. As much fun as tablets can be with apps for media, they’re even better as tools for work. I think it’s in everyone’s best interest to own one, regardless of how much they’re willing to pay.

What to Consider When Buying One

When you’re buying a product like a tablet, it’s important to know what you need it for so you can know what sort of specifications it requires. For instance, if you’re buying it for a child, then maybe you don’t need the best resolution screen, or multitasking efficiency. Also, be advised that even tablets that are marketed for children’s use still need to have their settings safeguarded by parents. Some of these tablets are more efficient for multitasking, some for watching movies. There are others that are best for simply searching the web.

The main things you need to consider when buying an Android tablet:

These are the best cheap Android tablet reviews. We think they all warrant consideration if you’re keeping to a low budget. This review was to give you an idea of what each is capable of and hopefully provide an ideal tablet’s information. Consider how often you think you’ll use it and what it will be used for. Personally, we think Fire 7 is your best option. It has the best specifications – Quad Core, Android 4.4, 8gb storage, and 1024×600 high resolution, and, whether you’re on a budget or not, it’s only $15 more than the cheapest Android tablet listed here. Consider what specifications you require and check out each of these tablets.

4.5 Reviewer
Quality
Easy of Use
Price

Your Kindle Paperwhite How to Use Guide and Manual