The 2014 Fire HD 7 (Amazon) and the 2014 Samsung Galaxy Tab 4 (Nook) are among the top rated tablet brands and models on the market. Which is why many argue as to which is better. Each has some comparable features as well as some unique ones that provide distinct advantages for their users. This review will provide you with a side by side comparison of the two in the hopes of helping you figure out which is right for you.

The Fire HD 7 is exceptional as far as eReaders are concerned; however, it does have certain limitations that can frustrate more advanced users. Its capacity to integrate with external application and software programs is almost non-existent, meaning that it is almost 100% dependent on content from Amazon. For a person that is simply looking for an elevated eReader experience, this should not be a problem. However, if you want a more interactive experience and the ability to use other applications, this may not be a good fit. 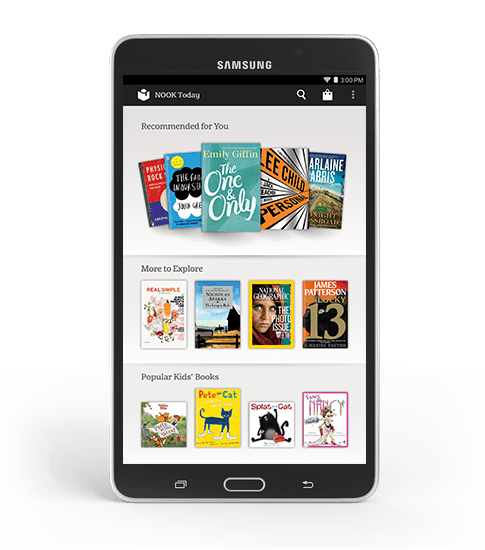 Although the Fire provides a superior reading experience, the Nook is more functional as a tablet. It is completely compatible with third-party applications, making it highly versatile and suitable for more demanding and advanced users. The Nook even allows users to use multiple apps simultaneously. The micro SD card allows users to store movies and music without maxing out the usable space on the system, meaning that there is no loss of system speed while multitasking.

The Kindle and NOOK Differences

There are some similarities between these two tablets, however, it is the differences that offer the distinctions that will help consumers determine which of the two might be best for them.

OS System: Openness or Not

The Nook runs on the Android 4.4 based system that is compatible with all Google apps, making it a Galaxy Tab with eReader capabilities. The Fire is based on Fire OS (Forked Android system) that is not as open as the 4.4.

As stated earlier, the most significant difference between these two tablets is the operating system. They both use an Android-based system; however, The HD 7 uses Fire OS (forked from Android 4.4) version, which is a more closed version. What this means is that the system does not necessarily work well with third-party applications, such as those offered by Google. This makes the user almost completely dependent upon Amazon to supply their content and functionality.

So, if you have a game you love that doesn’t run on Fire OS, you’re out of luck; and as popular as Amazon and their devices are, there are a few popular apps and games that are not available on it, which can be a major letdown.

The Nook, on the other hand, uses the 4.4 version of Android, which is completely open and allows users to access and use third-party apps. This expands the functionality of the device tremendously, making it a much more versatile option. You basically have unlimited resources, as any book, song, or game you want will be available to you. The person that is looking for an experience that is centered on operational capacity will gravitate toward the Nook.

The Fire HD 7 will win this battle, with a significantly higher screen resolution. In fact, the primary advantage that causes the HD 7 to stand out is its superior viewing experience. The HD7 has a screen resolution of 1280 x 800 ppi.  This creates a much sharper picture, thus the HD designation.

It is important to note that the resolution of the Nook is not poor by any stretch of the imagination, it is simply not as high as the HD 7.

Despite functioning on an older operating system, the speed of the Fire HD 7 is exceptional. The processor that is used is a 1.5 GHz quad-core processor, in comparison to the 1.2 GHz processor of the Nook. While this can be a very important feature for some users, the vast majority may not even notice due to the greater functionality of the Nook.

Due to its micro SD storage slot, the TAB NOOK has much more storage capacity than the HD 7. This is essential for users who like to store movies and music, which can take up a great deal of space. The SD slot allows users to add up to 64GB of additional storage space.

Fire HD has unlimited cloud storage which helps off-loading your content in the Cloud.

Although Amazon claims longer battery life concerning this specific comparison, experience and the examination of customer reviews reveal the opposite. This truth becomes more evident when the devices are sitting idle as the Fire HD 7 drains much faster. This is significant because mobility is a huge upside to using a tablet and a shprt battery life means you need to stay near a connection if you want to read without interruption.

As a general rule, the HD 7 retails at about $30.00 less than the Nook, which is the most affordable tablet under $150; it all depends on the retailer through which the device is purchased. You may find some online specials.

Conclusion
It all comes down to preference. For the person that is looking for the all-around experience, the Nook is definitely going to be a better choice. Its functionality is simply superior. On the other hand, the HD 7 is ideal for the person who is simply looking for the best color eReader. The screen resolution conjoined with the superior processor offers the best reading experience available in its price range.

How to Borrow Books from a Public Library on Kindle Paperwhite