The MWC 2014 Day 3 wearable news is exciting where more new products were announced that are sure to make a big splash in the mobile market worldwide. Sony unveiled its Life Wearable Camera and the Smart Band and Motorola announced the launch of their Smart Watch.

There were other wearable devices released that included wrist bands and bracelets, most of which were geared towards health and fitness. But, the Sony Smart Band actually tracks your whole life, dubbed now as the digital photo journal.

The Sony Smart Band SWR10 communicates by use of Bluetooth.

Its concept of creating life bookmarks that users can look at and refer to later in life is a fascinating one. It’s like a digital journal you wear on your wrist. Some of the data that can be tracked, includes, what you did, with whom and when. 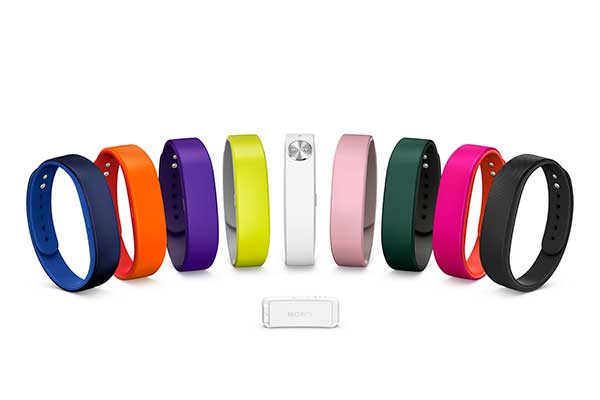 Roy Mostril, a rep from Sony says that there are also many apps that make it even more functional and will give you the ability to track virtually everything you do and save the information. For example, you can track and save music you listened to and any games that were played.

The battery life reported is impressive, with Sony claiming up to a week of use on one charge. It’s also reported to be durable as well, and can survive any conditions.

Could this be a digital memory bank, a second brain? The Smart Band is due to be released in stores in March of 2014.

Motorola Smartwatch In The Works

“It’s our intention to deliver interesting wearable technology – we are developing a watch which will be coming out in the next year, our main focus is that we will start to solve a real user problem in that there are no wearable products you want to wear – all because they are all extremely ugly.” Rick Osterloh, SVP product management, said at the event.

It seems that Motorola’s goal is to create a watch that will be stylish and look more like jewelry.

Motorola has confirmed this week on Twitter that they are definitely working on a new wearable watch that will be available this year. They did confirm that their goal is address market issues that consumers have, such as, something stylish in design and a long battery life.

Motorola also confirmed that the smartwatch will run Android, and not the older version Tizen, but the newest Osterloh.

This Motorola smartwatch will be another product in the Moto Line, quashing rumors that the line would end when Lenovo purchased the company from Google.

Interesting that the new Samsung Gear 2 and Gear 2 New announced at MWC 2014 are said to be a stepping stone between more passive wearables like the FitBit and the Jawbone UP. Since it’s smaller and designed like a bracelet, it will surely be a much better fit for fitness buffs and be more user friendly. It’s also said to be powerful with a dual core processor and functional because it can communicate with smartphones. According to Android Police it will be a “much more practical and usable device.

If you’re looking for the latest devices in the Wearable Tech or Quantified Self arena, the Mobile World Congress may be the perfect place to find your next fitness tracking or life logging device. Read more …

Looks like Sony has announced a prototype this week for a their Lifelog Wearable Camera concept. It is said to be designed in compliment with the Sony SmartBand and Core devices that will be released in March of 2014. All three devices are designed to work with Sony’s Lifelog lifestyle app for Android. This is a cool app that tracks and journals daily life activities of all sorts, pulling data from users smartphones, wrist wearables and the Lifelog Camera once it’s released. This is a very cool concept, imagine how much memory you can free up in your brain, when you have a perfect sync of ALL your daily activities on not one, not two, but, three devices? Read more details in the article below.

The new Sony Lifelog wearable camera concept prototype, has been designed to compliment the new Sony SmartBand and Core devices that will be launching next month. Read more …

This year, Mobile World Congress was always going to have a big focus on wearable gadgets that hook up to our phones, track our activity and vibrate every time anything remotely interesting happens. Here’s our rundown of the top wearable gadgets that we’re most excited about getting our hands.

It’s no doubt that Wearable demand is growing big in 2014. There were not many impressive new Tablet announced at MWC 2014 this year; instead, it’s all about Wearable Fitness Brand, Watch, and Gears. I’m going to save up $100-200 to buy one myself. My use case is more about Health Data, time, and help myself increase more health awareness.

What were your favorite wearable at MWC 2014? What are your use cases if you get one?