HP announced two tablets at MWC today, the first was the MediaPad 600 G1 and the second was the ElitePad 1000 G2, and it looks like a winner, especially for business users.

It’s operating on Windows 8.1 on Intel based CPU.

Like the MediaPad 600, the ElitePad has Bluetooth and WiFi. But, it also supports a dock station, has a long battery life with a 2-cell/30 WHr HP Long Life Battery and the storage is expandable up to 2 whopping TB via MicroSD slot.

Check out the ElitePad full feature spec on HP

And, another great feature is that the ElitePad offers high end audio with the DTS Sound+ system along with 2 built-in stereo speakers.

HP is slated to sell these in the US next month and prices will start at $739.

While HP has not been a major contender in the tablet market in the past, they are adding some new models this year in the form of phablets, which are tablets and smartphone combination devices.

The new Slate VoiceTab in both 6″ and 7″ inch models will launch in various European markets and they are already available in India. It seems that HP is targeting emerging markets when sales of these phablets begin. HP stated they are still not sure if these models will be sold in the US, but it is a possibility. 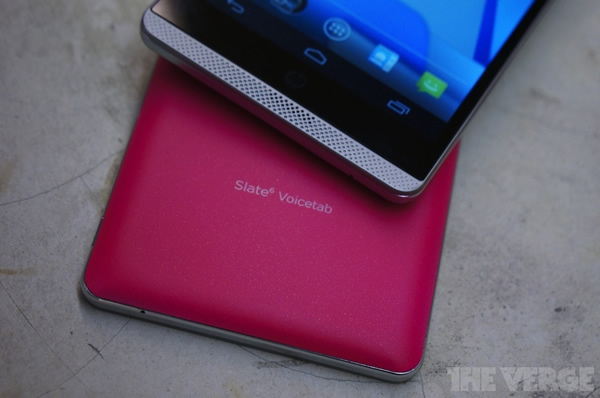 Credit by The Verge

The specs of these mobile devices are modest to say the least, and certainly cannot complete as far as impressive features go with the earlier announced new Phablets from Huawei that come with a very long battery life.

Both the 6″ and 7″ inch models will have a dual SIM option and include HPís DataPass service, which offers users 250MB of free 3G data per month. Specs also include, 16GB of onboard storage that will be expandable to 32GB with the use of a microSD card slot. Both phablets also have a 5-megapixel main camera for taking photos.

The main difference between these two phablets is the screen size and resolution. The 6″ model has a 720 IPS display, while the 7″ slate will have a 1,280 x 800 resolution IPS panel. Pros present at the WTC who got a hands on feel for the phablets report that the screen display looks great with clear and crisp icons.

HP differs from popular models of phablets from LG and Samsung in that they only offer the stock Android experience.

An interesting element of these new phablets from HP is the wide array of back panel colors being offered, including, hot pink, purple, greys and blues. HP reports that all the back panels will be interchangeable, which, offers users a lot of choices to suit their tastes and moods.

Sure Samsung drew back the veil on the Galaxy S5 smartphone and a new trio of smart watches, but the day did not belong exclusively to the Taiwanese manufacturer. HP joined in on the action with a wallet-friendly Read more …

HP has announced the devices have undergone some re-design work and are now destined for some European markets and the Middle East, in addition to India, this May. The latest pricing information puts the VoiceTabs starting at around $340 off-contract, where they should fit in with the lower end of the market they appear to be targeting. Read more …

After we previously saw that HP launched the MediaPad 600 G1 tablet, now it’s time to show you the 2nd tablet announced by HP today. Its name is ElitePad 1000 G2, and could be the total business solution that you’re … Read more …

The photos in the above article show a really slim tablet, and considering all the features of the ElitePad the compact design is quite impressive.

Today, HP announced two new business tablets. The first one it’s the HP ProPad 600 G1, a tablet that comes with a great hardware and Windows 8.1 or Windows 8.1. Read more …

A full spec sheet hasn’t been released for the newly announced ElitePad 1000 G2, but more information should be revealed over the course of MWC 2014, where the tablet is on display. The ElitePad is joined by the ProPad … Read more …

This MWC 2014 day 2 tablet news is quite exciting, and it seems that we will have some great new products in the stores soon. I’m impressed that HP are still investing in producing niche Tablets in this competitive market. ElitePad 1000 G2 is targeting Enterprise Market and those Windows Based Hyper Laptop + Tablet makes sense given consumers are interested in buying 1 for 2 use.

I’m not so impressed with HP Slate VoiceTab though. 7″ inch tablet market is so crowded. I don’t know what the point is to have another 6″ tablet spec; unless the price point is very attractive like less than $100. I just don’t get 6″ inch tablet and how popular it would be.

Kindle Valentine's Day Gift Ideas for Her: Light Her Fire This Valentine with Kindle