There were two new budget tablets announced at CES 2014 in Las Vegas, and both are form Alcatel. The OneTouch Pop 7 and The OneTouch 8. It is exciting that they offer LTE on such cheap models, and both run the Android 4.2 Jelly Bean operating system.

Unfortunately the Pop 7 comes with 1,024 x 600 resolution TFT screen which is not an IPS model and this makes for very narrow viewing angles. The processor is a 1.3GHz dual-core MediaTek MT8312. This tablet also comes with front and back cameras and 1GB RAM.

It is very lighweight, weighing at only 0.62 pounds, but it’s way too thick at 0.35. But those that got a sneak peek at CES reported that it was comfortable to hold, and that is all that really matters in the end.

The OneTouch Pop 8 tablet has an 8″ display with high def resolution of 1280 x 800 and it is an IPS screen which makes for much better wide angle viewing performance. The processor on the OneTouch 8 is a 1.3GHz quad core , brand name unknown at this time and this tablet also has 1GB of RAM. It weighs slightly more than the Pop 7, but it’s thinner and so has a much more sleek design. 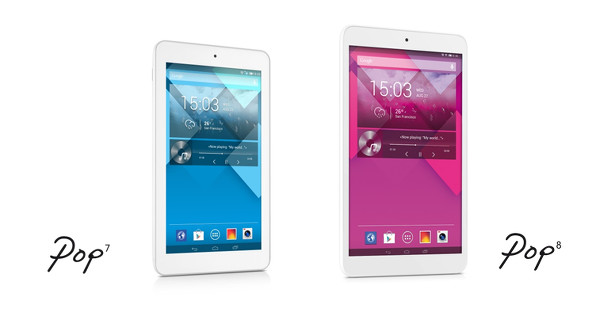 Both models are not impressive in storage capabilities, at only 2.4GB usable space, but this is upgradeable with MicroSD storage slots on both models that support as much as 32GB on the Pop 7 and 64GB on the Pop 8.

Alcatel did not announce prices at CES, but indicated they would be under $200 for the Pop 7 and under $300 for the 8. Release dates are pending as well.

The best news of this announcement is that both of these super budget models will be quipped with LTE, the fastest Internet connection to date and that is quite impressive for tablets under $200 and $300.

As seen in the video, the Pop 8 has a very sleek and stylish design, and comes in both black and white casing options. The 8 hours of browsing time on the battery that Alcatel promises is really great for such a budget tablet.

While the Pop 7 is smaller than the 8, it is still quite impressive and I think more than large enough for basic users that want to spend a lot less than they would on the more pricey tablets like the Samsung and Asus models. The clear cover that Alcatel promises sounds really great too. Having the ability to see through the cover to quickly check for email and social media alerts is very convenient as opposed to the traditional covers that do not allow for viewing of the screen until they are opened.

In addition to bringing a slew of new mid-range phones to market, Alcatel has also introduced a few new tablets. The POP 7 and POP 8 are, as they sound, seven.

Definitely, Alcatel tries to get into the low priced Android tablet market. However, the price may not be competitive as those $100 range one. I hope the OneTouch Pop 8 could hit the attractive Price point. Also the Brand is in tier-3 and may more awareness.

Awesome Gift Ideas for Father's Day: Show Your Thanks For Dad with a Kindle He'll Love