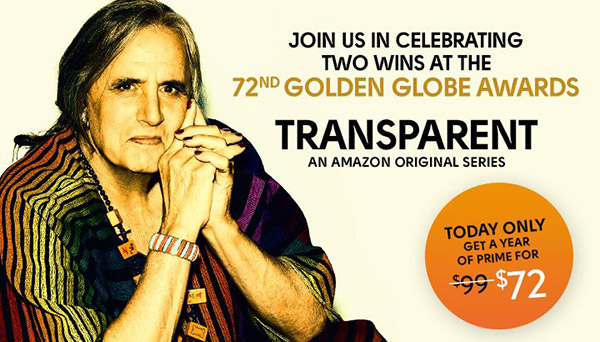 If you’ve been thinking about signing up for an Amazon Prime account now is the time to do it thanks to a 1 day Amazon Prime Discount. Today only (Friday, Sept 25) consumers can sign up and get a 1-year Amazon Prime membership for just $69 and they can also view their original series “Transparent” for free. “Transparent” recently won 2 awards at the 72nd Annual Golden Globes (including Best Comedy Series) which is why Amazon is offering this “prime” deal. This special offer, while enticing, is just one reason to become a Prime member. There are a lot of other perks to signing up , including expedited shipping, thousands of books and movies and of course, lots of great shows you won’t find anywhere else. Let’s see what Amazon has to offer.

“Transparent”, starring Jeffrey Tambour (who won a Golden Globe for Best Actor) as a father who is trans-gender is just one of many shows available with a Prime membership. Amazon has created several new shows this past year and they can all be found exclusively on Amazon. You can also find many of the hottest shows on cable and network TV available for streaming as well, such as “Downtown Abbey”, “Justified”, “Pretty Little Liars” and more. These shows can be viewed on a per episode basis or by buying a season TV pass at a reduced price.

Members can view these programs on their TV’s, PlayStation, or any of their devices (both Android and Apple) using the Amazon Instant Video App. These shows can also be streamed on your PC at Amazon.com/Transparent.

It should be noted that only “Transparent” can be viewed on Saturday for free and that even non-Prime members will have access to it that day as a way of giving them a preview of what type of programming they have.

Amazon has one of the most extensive movie libraries around, with more titles than Netflix, Hulu and Redbox. It also costs the same (well, with this 1-day discount it costs less) for a year subscription to Prime than these other services and you get more ( like books, shopping bonuses and free shipping). Plus, they have a lot of movies that Netflix doesn’t offer, so members have a lot more to choose from. Just like with their shows these movies can be streamed or downloaded to any device, so you can watch wherever you are.

Many titles are free and the ones you pay for cost less than with other companies. Among their most recent additions are some of the most popular movies, including “The Hunger Games: Catching Fire“, “Jack Reacher: Shadow Recruit”, “Frankenstein” and “Anchorman 2: The Legend Continues”.

Great TV shows and the hottest movies are just 2 of the many reasons to take advantage of this Amazon Prime discount and deals. Let’s see what else you get when you join:

• Expedited Shipping: All Prime members get free 2-day shipping on any item – NO minimum purchase amount required, which is a big bonus. Shipping, especially if you want an item quickly, can be costly and make ordering not worth it. For instance, non-Prime members require orders of $35 or more to qualify for free 2-day shipping. Plus, most other companies don’t offer this except during holidays or when you spend a certain amount so this is a huge reward for signing up.
• Access To Amazon’s Libraries: Besides TV shows and movies as a Prime member you get to play, listen to and watch thousands of songs, books and video games for free or at a reduced price. Amazon has all of the biggest names and best sellers, many of which cost little to nothing with your Prime membership.
• Free Monthly Kindle Book: Each month you get one free Kindle book to borrow out of over 350,000 titles. This offer lasts as long as your membership does, so you can read a new book every month for the rest of your life.

This Amazon Prime membership discount is the perfect reason to sign up and join. Amazon offers so much exclusive content and at such a great price that it would be foolish not to join. At $99 membership was already considered a steal, but at $72 it’s practically free. You get the ease and convenience of free, expedited shipping, quality, one-of a kind programs and great pricing that basically pays for itself. Treat yourself like the star you are and sign u now – this deal won’t come around again.

Ideas and Decisions: Choosing the Perfect Gift for the Kindle Lover In Your Life