Big news is brewing in the book reader market as Amazon, the leader in the book reader market, is apparently preparing to release a new version of their popular Paperwhite reading device as new Kindle Paperwhite Rumors in 2015. While no official announcement has been made, TechCrunch reports that they have actually seen the prototype and that Amazon is planning the release in mid-2014. 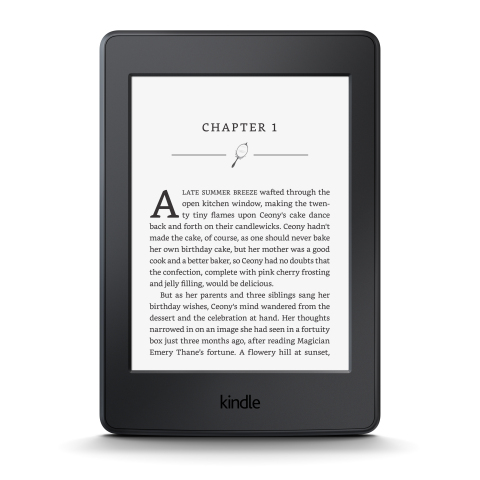 For UK Readers, check out our Voyage UK Discount here.

It comes with PagePress Sensors (very innovative) and Wifi! Also it’s the thinnest Kindle so far. 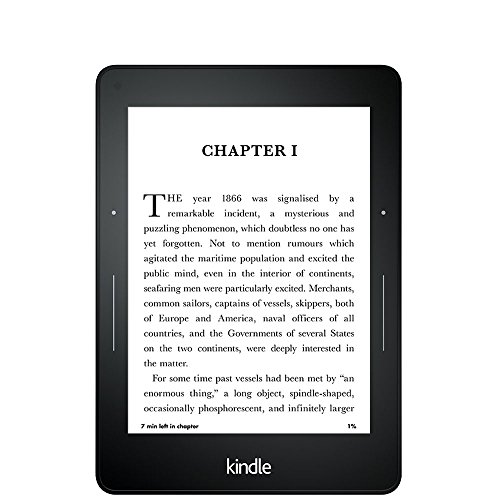 Check out our In-depth Voyage Review and Discounts Here. 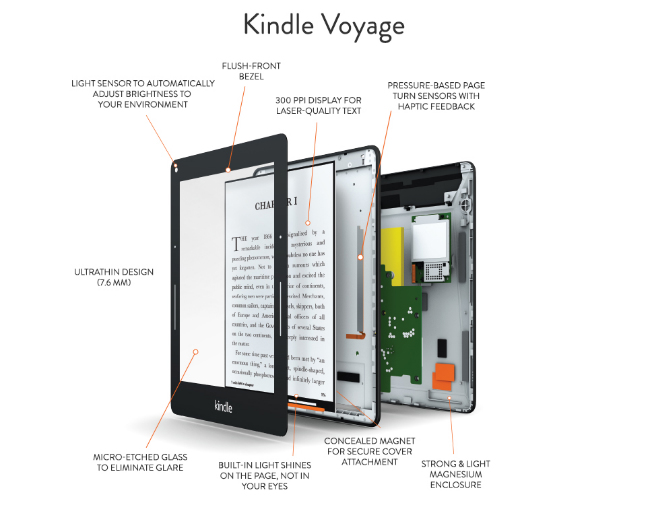 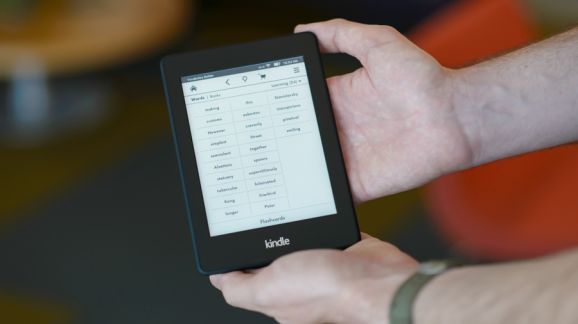 6/18/2014 Hot Update: Amazon Fire Phone is not a rumor anymore. Check it out at Amazon Today! Sorry, it’s an US available only for now.

Per the collected rumors, the new screen resolution will come in 300 ppi and will be comparable to the leading competitor model, specifically, the highest resolution display known to date, which is available on the 265ppi Kobo Aura HD.

Another improvement is that the screen will be made out of a matte glass on this model (Confirmed 9/17/14), as opposed to, plastic as seen in previous versions. Surprisingly enough, TC reports that the unit is actually lighter with glass than with the current plastic screen.

Another improvement reported in the works is that the front screen will be flush to the edges of the reader, as opposed to recessed as it is now.

It is also rumored that the edges will have haptic squeezable buttons for turning pages while reading. This will be great because it will keep the sleek lines of the margins.

Also, this new feature should please Kindle reading lovers because it will allow for tuning of pages without the awkward motion of having to reach over with the thumb to tap the ìnext pageî area, as the Paperwhiteís require now.

And, the back of the reader will include a power button, similar to that seen on Kindle Fire HDX models.

Who knows when 2014 Paperwhite will be released? Meanwhile, check out the current available one with the beautiful built-in light screen.

A built in ambient sensor is said to be included in new Kindle Paperwhite models, which will automatically adjust the screen to the lighting in the area where it is being used.

Another interesting feature that is said to be in the works is the new typography, where the Kindle Paperwhite will have a custom-built font that is created just for reading.

Another Rumor source from Good Reader states that new Paperwhite 3 will be using Mobius screen technology from Sony. It’s 50% lighter comparing to TFT screen which is glass-based.

Not only that, the power consumption is much lower per eink tech spec. It gonna be a break-through for Paperwhite eReader family this year if it’s the case. However, I suspect this new screen technology may not be in large-scale production yet. It may add up the component cost and lower Amazon margin.

I’d love to have this kind of screen on my next Kindle. And you? Leave your thoughts below the blog post.

This gonna be the 4th Generation of a Kindle Touch Screen. Kindle Touch (1st Gen) was introduced back to 2011.

Personally, I hope there was color e-ink. I got some Ebooks in pdf with beautiful color images. I enjoy reading those on Kindle Fire but hate a little bit glare.

Also bigger Paperwhite Screen size is preferred. That means you can see more content on the screen, with less “turning pages”.

Don’t think a “blendable” screen is needed, but higher resolution and crystal clear font is a must-have for e-ink reading.

Maybe thinner frame and smaller form-factor – more portable is an awesome upgrade. I do look forward to Paperwhite 2014 – which Amazon is cooking up for this Christmas.

More About The New Kindle Model From The Blogosphere

Details on the next generation Amazon Kindle Paperwhite , codenamed Ice Wine, have sprung up online revealing that readers may well be treated …

Love the code name Ice Wine for the new Kindle Paperwhite and this story reports a 6″ inche screen, which, will be a nice improvement.

Amazon’s Kindle Paperwhite is one of the top-selling e-readers on the market, and it’s also one of the best. New reports claim that Amazon’s book reading device is set for an upgrade next year that’s going to make it a whole… Read more …

According to this story from Geek, the new display will be quite impressive. The planned 300ppi resolution will certainly be a huge improvement over the 212ppi that is on current Kindle models. And, of course, it seems that Amazon Paperwhite will become the highest res book reader and will definitely beat it’s biggest competitor in terms of screen res, Kobo Aura HD that comes with a 265ppi.

Amazon’s Kindle Paperwhite is one of the most popular e-readers on the market, widely appreciated by customers. The company might already be working on a successor, according to TechCrunch, which claims to have seen

I’m very excited for the new Paperwhite Rumors 2015. Kindle E-ink screen has been my favorite for reading my books on regular basis. This 3rd generation is going to blow away your expectation and hopefully will create another wave and Kindle Upgrade for all the Kindle Lovers and new users.

One thing that I’d like to see is to have multiple color case choice as iPhone 5c. It just makes the reading experience more fun. Or you will just pick up those Colorful paperwhite Skin covering up your Kindle.

Fire Tablets are out and available. Amazon uses “Kindle” brand for eReader and “Fire” for its tablet line of products. Check out the latest All Fire Tablets. It was a shock to know that the Entry Level Fire is only $49. This is the 5 Gen one.

9/17/2014: Amazon finally announced Paperwhite 3rd gen Kindle Voyage with a lot of surprise comparing to our Rumor Report. For me, the price is totally out of range that many of readers may still prefer Paperwhite with 4gb storage refresh.. Either one is still the best lighted e-ink Reader in 2014!

2015 Update: Paperwhite has refresh version as 300 dpi. It’s awesome given this is the best Lighted eReader in the market. Even Better Paperwhite comes with Exclusive Bookerly Font. It’s beautiful reading experience. Go and check it out!

Amazing Amazon Fire Phone Hands On Review: How Does the Kindle Phone Look like?