The highly anticipated new tablets from Samsung, the Galaxy Note Pro 12.2″ and the Tab Pro that comes in three versions, 12.2″, 10.1″ and 8.4″ were announced today at CES 2104. These are high end devices that will surely continue Samsung’s success in the mobile market.

ìWe created the Galaxy NotePRO and TabPRO series to kick-off a year in which Samsung truly establishes its leadership in the tablet market,î said JK Shin, CEO and President of IT & Mobile Division, Samsung Electronics. ìThis new line offers the best-in-class content consumption and productivity, combining a stunning viewing experience with Samsungís design legacy. The Samsung Galaxy NotePRO and TabPRO truly demonstrate our commitment to providing our customers with extraordinarily versatile product offerings, tailored to tablet users of every description.î

The new lineup from Samsung is sure to provide users with a fantastic display and an impressive set of features. The combination of a premium design, powerful performance and exceptional productivity tools and features promise to make these new tablets the mobile solution of the future. 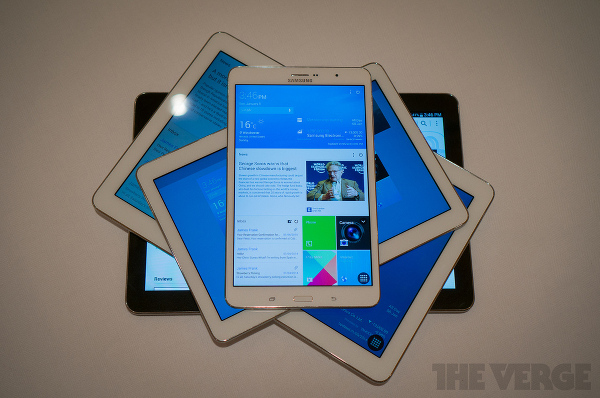 While the display is the largest available, it does not compromise portability, because the NotePRO and TabPRO are still sleek, lightweight and have a slim frame makes sure it remains highly portable and user friendly.

The personalized Magazine UX custom made for larger screens, allows tablet uses to fully customize their dashboard, including adding news feeds, most used apps and whatever else they need to access quickly. The large screen with the magazine style set up make for a much more comfortable user experience.

The Samsung Galaxy NotePRO and TabPRO tablets will be available with various connectivity options: WiFi Only, WiFi and 3G, or WiFi and LTE.

Multi Window allows the screen to be divided into four different windows. The Virtual Keyboard is ample and easy to type with using haptic feedback that makes you feel like you are typing on a more traditional style board.

The Samsung S Pen that comes with the Galaxy NotePRO is a nice addition that makes for a more responsive and user friendly experience.

From The Blogosphere CES 2014 Tablet News

At the Consumer Electronics Show, Samsung had announced a new larger-screened Android tablet in the form of the Galaxy Note Pro 12.2.

Samsung’s going pro. Two new tablets, the Galaxy Tab Pro and Galaxy Note Pro, were shown on a billboard posted this evening at the Las Vegas Convention Center. Both devices are expected to be…

Our CES 2014 press day continues this afternoon with Samsung’s 2PM Pacific event. Samsung likes to show off all sorts of products during their event, which makes sense since they do a heck of a lot more than mobile.

ZAGG Has New Keyboard For The Samsung GALAXY NotePRO and TabPRO

There were many rumors leaking out ahead of CES 2014. New Line of Galaxy Tablet is something we have expected. I’d say Samsung Galaxy Note Pro 12.2 has set a new tablet standard for 12.2″ and WQXGA 2560 x 1600 resolution is killing. It definitely has fired up the Tablet spec war for 2014.