CES 2014: After the big debut of the new Asus Transformer Book Duet, the world’s first Qaud Core, dual operating system hybrid, Asus has another great product launch, the latest version of their PadFone, the PadFone X.

Historically the PadFone was not sold in the US, so this version will be its debut.

Asus remains true to form in their innovation in combining things together, from hybrid tablet/laptop to their latest hybrid that not only combines, a tablet and a laptop but also brings two operating systems into one device with the Book Duet, PadFone X is no different, as it combines phone and tablet into one device. 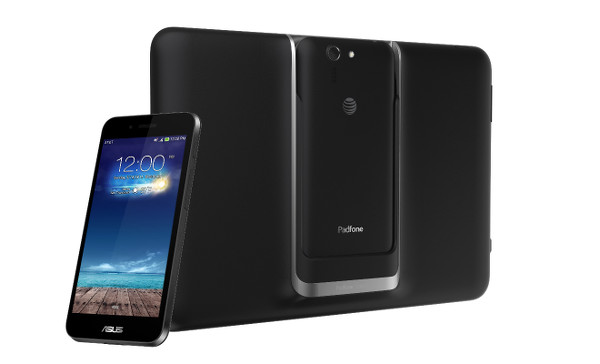 This makes the Padfone X the first smartphone/hybrid device.

Though all specs have not been released, we do know that it is about 5″ in size, runs on the Android KitKat OS and comes with a 9″ slate, both of which will have full HD displays. It will also come fully loaded with the fastest mobile Internet connection, LTE Advanced, Isis mobile payments and HD Voice.

The design of the tablet/phone hybrid is a 5″ smartphone that docks into a 9″ tablet dock station. Once docked all data from smartphone is picked up by the tablet. There is an auto adjust feature that makes for a larger screen when the phone is docked.

The PadFone X is visually appealing with a sleek brushed metal frame and soft touch back cover. Another feature of interest is the audio. The X comes with two front speakers, and the audio is said to be high in quality.

As of now, all other important specs are yet to be revealed, such as the processor, RAM memory, and disk storage. The price tag and release date has yet to be announced too.

I love how the phone docks to a tablet, this is something that will be very engaging for business people that travel, such as myself. Doing work on a smartphone is often annoying with the small screen, but being able to dock it to a tablet and increase the display it a big perk.

You can count the number of ASUS devices that have been carried by AT&T on two fingers, but the GSM network is ready to show off the duo’s third.

It is very interesting that Asus chose to partner with AT & T, since they have done this only twice before. AT & T is a mobile giant in the US, and I guess they would be remiss if they did not become more involved with this service provider.

[CES 2014] We have seen a slew of devices announced by the folks over at ASUS earlier today, and here is yet another device which you might actually be interested in.

AT&T is trying to get some exclusive deals and have success as they had with iPhone. I think this is an interesting category gadget, but may not sell in volume unless they will do aggressive marketing with it.

Asus Padfone X for AT&T: A phone that powers a tablet

An LTE tablet that doesn’t require an additional data plan charge? Sort of. The Asus Padfone X for AT&T uses an LTE smartphone — and its data plan — to power a companion tablet when the phone is docked.

This is a beauty of it. You could pay one data plan for your phone, and could use it for your tablet. That’s brillant!

Well, the data plan saving is a pretty smart move, just that it’s a little bit cumbersome in my opinion. Could it be more slim and integrated as an unit? I see people using iPad at Starbucks, but it may be awe working on this in the public.

What’s your opinion on this new beast?

Hands on with the ASUS PadFone Mini at CES 2014 | TalkAndroid …

At their CES 2014 keynote, ASUS announced the PadFone Mini. The device packs a 4-inch smartphone inside of a 7-inch tablet. A dual-core Intel Atom processor powers the PadFone Mini and it ships with Android 4.3 …

It gonna be a big win for AT&T to have something exclusive and special as a Phone/Tablet Hybrid. No iPhone exclusive anymore. I’m impressed how it turns out to be an Android Smartphone +  4G wireless connection (transforming into a tablet) without paying another data plan as an end-user.