While there were fewer tablets being shown on Day 1 of CES than in years past the ones that were unveiled had some serious WOW factor to them and were worthy of all the attention they are getting. Day 2 continued that trend as some truly impressive tablets were shown off from tech powerhouse Toshiba and the newly formed Jide company. There was also some impressive tablet related technology being shown from companies like Linux and Intel too, making it a great day for the tablet industry. We have a complete recap for you of all these exciting new products shown on CES Tablet Day 2 to make sure you don’t miss anything.

The Writings On The Wall 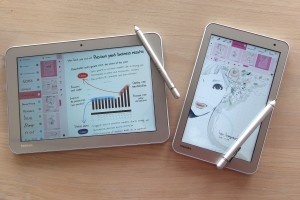 Tablets may not be as buzzed about as they were when they first burst on the scene but it looks like that’s going to change thanks to Toshiba and their innovative tablets and accessories. Their line of Toshiba Encore 2 Write Tablets are being called game-changers because of their advanced technological features and components, elevating the tablet to a whole other level.

The Encore 2 Write Tablet is special for a couple of reasons. This slim, pure tablet has some features that make it an instan favorite. It It fly’s in the face of today’s tablets as it is stylus based rather than touchscreen focused. While some feared that might be a mistake it turns out to have been a genius move thanks to their TruPen technology.

Toshiba’s TruPen has a Wacom-licensed digitizer and intricate stylus capabilities composed of over 2,048 pressure points for true writing ability. You can draw and write with remarkable precision, just like you would on actual paper.

This capability spurred Toshiba to make the Encore 2 into the ultimate note-taking tablet that no student, businessman, artist or writer should be without. The tablet runs on Windows 8.1 and has 3 ingenious apps aimed at these fields: 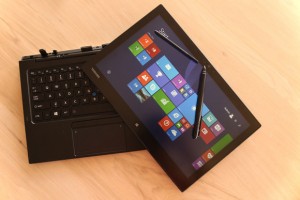 If that tablet wasn’t impressive enough you can also check out Toshiba’s other new reveal, the Portege Z20t, an upgrade to their Portege Z10t. Like the original this tablet hybrid is made the image of the Surface Pro with a connecting keyboard, but with some much needed improvements. They’ve upgraded the inner components with a Core M processor, and M.2 SSD with up to 512GB of memory. They also vastly improved the connecting keyboard, which was a major issue with the Z10t. The new keyboard is lightwieght, but much sturdier so it feels solid and stable. Best of all they’ve equipped it with a small stylus pen in the back of the tablet, in addition to the one it comes with so if you misplace the original you always have the back-up with you. 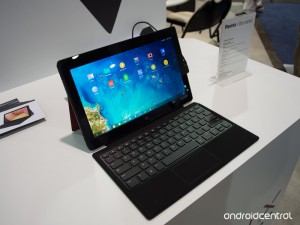 Toshiba wasn’t the only company with tablets to offer. Jide, a new company composed of 3 former Google employees also unveiled a new device, called the Remix Ultra Tablet. The Remix is a blend of performance and power consumers will appreciate. This tablet/laptop hybrid is made with an unique blend of metal and high-grade plastics to give it a custom, upscale feel without the high price tag. It’s packed with power too, as it’s composed of a NVIDIA 4+1 processor (no word yet whether it’s a Tegra 3 or 4), a 5MP front & rear-facing camera, 2 GB of RAM and an 11.6″ 1080p display. It also has a MicroSD slot for an added 128 GB of storage to go with your 16 or 64 GB flash drive.

In addition, Intel and Linux showed off some new PC based sticks that were packed with features. Intel’s stick PC has a Z373F Bay Trail quad core processor and will be retailing in 2 versions, one of which will be pre-loaded with Windows 8.1, 2 GB of RAM and 32 GB of on-board memory. The one drawback is that it functions through USB and is not HDMI compatible.

Linux’s PC stick is similar, except it has 1 GB of RAM and 8 GB of on-board storage, making it the less expensive option.

Day 2 of tablets at CES did not disappoint, as the tablets and technology being showcased were first-class on every level. These innovative and eye-catching new devices will enhance both the work and play aspects of your life and make a great addition to your collection of gadgets. They will help you see the world and interact with it more efficiently, making your life more well-rounded and enjoyable.

Where to Find the Best Kindle Nonfiction