The long awaited and much anticipated Amazon smart phone is finally here.  All roads led to Seattle today for the unveiling of the new Kindle Fire Phone. On this very important date, 18th June 2014, Amazon CEO Jeff Bezos launched the new smart phone, called the Kindle Fire Phone. This Fire Phone review is designed to whet your appetite and get you caught up on the details. 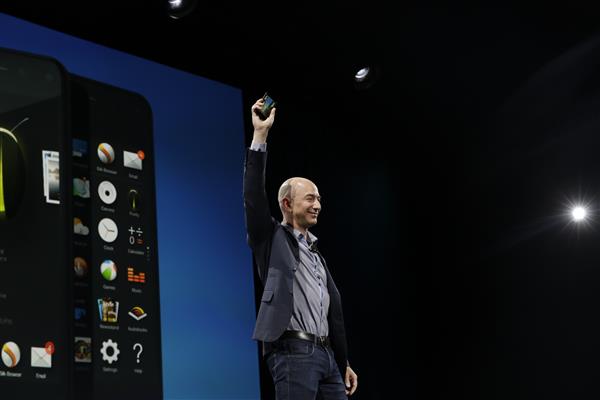 What is known about the phone so far?

The Amazon Fire Phone is the official name. This product is the first of hopefully many smartphones to come from Amazon. This new device is bien unique, with specs that place it far above other smart phones available on the market today.

The phone looks like a slightly bigger iPhone. It has an array of cameras–six, to be exact.  This includes the 13 Mega Pixel rear camera, the front view camera and four infrared cameras.

More about the Extra Ordinary 3D Interface and Tilting Effects

The Fire Phone is manufactured with a heavy skin. This facilitates the proper functioning of the 3D interface. It offers a new navigation experience that overpowers the old swipe norm,  allowing users to access the settings not by swiping or tapping the icon but by tilting the phone left and right. Delivering an MMS requires you to tilt the phone towards the screen to gain access to your gallery images, then attaching your image and sending the content.

This 3D effect has a name.  Rather than just calling it “3D”, CEO Jeff Bezos refers to it as “Dynamic Perspective“.  I know, it sounds like an 80’s hair band, but it’s way cooler than that.  Dynamic Perspective (DP) makes objects appear to shift as you move your head, as if you were seeing them at different depths in your phone.  Unlike the 3D that we are used to in the movies, objects do not appear to jump out at you, and you do not need any special glasses for the effect to work.

There are four infrared cameras on the front of the phone that track the movement of your head, and “redraw” the image onto your phone’s screen.  With four cameras, it is virtually (no pun intended) guaranteed that your movements will be tracked at all times, even if your thumbs are covering two of them.  And because they are infrared, they work in the dark.

Amazon Fire Phone is on Sale with AT&T exclusively.

Sounds cool, but what is the Purpose?

Let’s say you’re looking for a particular monument on a map.  On a flat map, the image will appear as a small drawing, located in the approximate area that you are searching, and will look nothing like what you are searching for, potentially making identifying the marker difficult.  With Dynamic Perspective, when you tilt the phone you are immediately looking at a 3D image, making identification much easier.  The same could be said for shopping–viewing an item from multiple angles makes the consumer more likely to purchase it than simply seeing a flat, 2D image.

Where did it come from?

The new technology is being contributed to the work of Japanese company Omron Okao Vision.  The original prototype for the program allowed for analysis of the user’s face to determine ethnicity, age and gender.  Amazon modified this technology to suit it’s own purposes.

Will This Hot Phone Sell?

With the smartphone market being one of the most competitive in the world, and with Apple and Samsung generating more than 60% of the market revenue, Amazon had better show up to the game ready to play.  The success of Dynamic Perspective will depend largely on whether or not developers can be convinced to write it into their apps.  With over 240,000 apps currently available for their Kindle products, and hundreds more in the works, they have a better-than-average shot at making the big boys sweat, but it will take some effort.

I keep hearing about “Firefly”.  Do tell.

Simply put, Firefly is designed to get you to buy more stuff…specifically from Amazon.  The app is part of the package deal on the phone, and contains image, text and audio-recognition technology designed to revolutionize the way we shop.  Using Firefly, you can scan and identify books, songs, movies and other items, in addition to addresses, QR codes, phone numbers, barcodes, artwork…you name it, you can pretty much identify it with Firefly.

You could use Firefly to identify an exotic fruit or vegetable, a song, a clip from a movie…Basically, the app is designed to bring you deeper into the world of the consumer, taking the guesswork out of shopping and shipping with just a couple of clicks.  According to Amazon, the Firefly feature will recognize 70 million products, 35 million songs, 245,000 movies and TV episodes, and 160 live TV channels.

If it takes off, Firefly could drive brick-and-mortar stores crazy.  The consumer can walk into a store, scan an item and know instantly if it is available on Amazon cheaper, and then purchase it…all while standing right there in the hair-care aisle.

That’s a lot of chances to spend money.

Amazon has decided to include a chat-to application in its smart phone, similar to Apple’s Siri, known as Evi. It is a natural voice that is heard when using the search engine. This app makes using Kindle a whole new experience for Amazon customers.

The Kindle Fire Phone offers a short cut to accessing the Amazon online store, and those accessing the online store using the phone will benefit from the cheaper services. This will allow Amazon services to be delivered at reduced costs to the Phone users.  It also comes with a free 1-year subscription to Amazon Prime, meaning that qualifying purchases will be delivered in two days.

Comparing the Fire Phone, the iPhone and  the Samsung Galaxy.

The Amazon Fire Phone compares favorably to it’s competitors in size and operating system.  The price of the Fire Phone is a plus, simply because it provides a larger capacity phone than either iPhone or Galaxy, for the same price.  AT&T is the only Fire Phone carrier at the moment, however Apple devotees will recall that when the first iPhone was launched back in 2007, AT&T was the exclusive carrier for three years, giving it the competitive edge over Verizon and Sprint and jump starting it’s foray into the smartphone market.

What went into the creation of the Fire Phone?

Amazon has taken time to study the market and come up with a smart phone like no other. They have outsourced the services of the best phone manufacturers and software developers to make what only existed in their imaginations come to pass as reality. Although it is using an operating system previously used by other phone manufacturers, Amazon has customized the Android OS to give a new experience to their customers. To ensure delivery of a quality product, Amazon is seeking the services of a third party developer. Two heads are better than one, but in this case, three heads are the best.

The Release and the Price

The reported price of the Fire Phone is $199 for the 32 GB model, with a year of Amazon Prime included for free.

Check it out and Pre-order one today.

Which type of Android Operating System is in the Fire Phone?

As expected the phone is running a heavily customized version of Android that is similar to the OS on it’s Kindle Fire tablet lineup.

What are the dimensions of the phone?

Who manufactures the Kindle Fire Phone?

No word on this yet, but keep checking back–as soon as we know, you’ll know!

The new Kindle Fire Phone promises to be an intriguing piece of technology. As you all know, the fun in owning a new phone is learning how the phone works. It’s like Christmas for grown-ups!  Take time to snoop around your phone and discover the treats it has in store for you.

This Fire Phone review is just a peek into what you should expect once you purchase the smart phone. The Fire Phone will be your short cut to Amazon store and all the benefits associated with it. Light up your life with the new Fire Phone from Amazon. With the success of Amazon’s Kindle tablets and it’s new Kindle Fire television, this anticipated smart phone cannot possibly disappoint!

Kindle Valentine Gifts For Him: Make Him Feel As Special As He Makes You Feel